Save and Load in Blueprints

To Save a game we need to define all the information that is necessary to store to be able to load the game later. This information needs to be gathered and stored in variables of a Blueprint of the type "SaveGame". The image below shows the functions used to Save and Load a game. 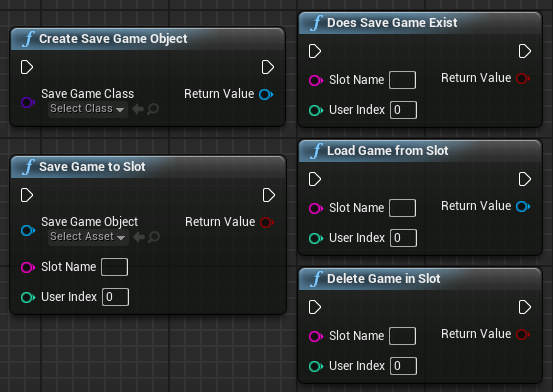 As an example of using these functions we will add the option of Quick Save and Quick Load to the game that we developed in the first part of this blog. The game is described in this article: "A very simple game in Blueprints".

But do not worry if you have not done the game of the first part, because the concepts presented in this article can be easily adapted to your game.

The first step is to create a new Blueprint of the type SaveGame. To do this search for "Save" in the option "All Classes" and choose as Parent Class the class "SaveGame" as shown in this image: 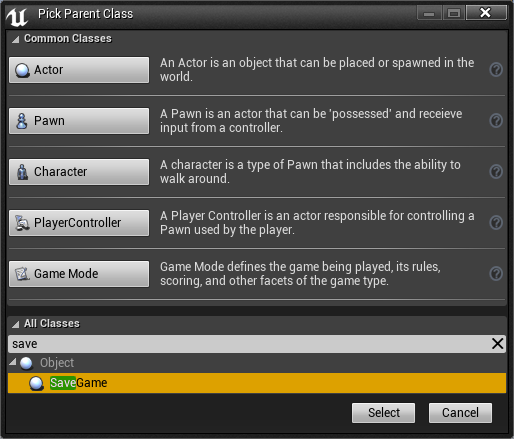 For my example, I chose the name "SaveInfo" for this new Blueprint that will contain all the information that will be saved.

The variables of the "SaveInfo" Blueprint are:

All variables were marked as "Editable" (represented by the icon with the open eye) to facilitate access to these variables in other Blueprints.

The Blueprint "SaveInfo" is used only to store the information. Nothing is created in its EventGraph.

In this example the Blueprint "GameHud" will be responsible for the option of Quick Save and Quick Load. We will add a variable of type SaveInfo to "GameHud" to fill with the information that will be saved. The name of the variable is "SaveInfoVar". 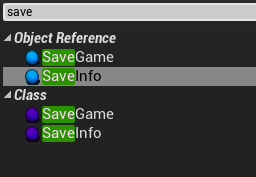 To organize the Blueprint I created the Macros SaveGameVars, SaveTransforms, LoadGameVars and LoadTransforms. They are used to move the information between the Blueprint SaveInfo and the Blueprints of the game. The contents of these Macros will be shown later.

This is the implementation of Quick Save:

Let's look at each of the Functions and Macros used:


When the Quick Save is performed, the Blueprint will create a file using the Slot Name and the extension ".SAV". In this example the BP_Game.SAV file was created in the "ProjectName->Saved->SaveGames" folder. This file contains the data of all the variables we created in the Blueprint SaveInfo. The UserIndex parameter allows multiple SaveGame objects being saved on the same file. To do this, change the value of UserIndex.

Below is the implementation of Quick Load:

The Functions and Macros used:


To conclude the article we will examine the contents of each of the created Macros.


In this Macro we are just storing the values of GameHud variables in the variables of the SaveInfoVar object.


The player Transformation is obtained using the GetPlayerCharacter and GetActorTransform functions. To save the Transformations of the "Statues" we use Arrays with ForEachLoop.

We use the "Get All Actor of Class" function to get an array containing all the "Statues" that are in the game. Using the ForEachLoop we get the Transformation of each "Statue" and add it to the StatuesTransforms Array of the SaveGameInfo object.


This Macro was based on Macro StartGame. But instead of using default values to start the variables, it is being used the loaded values of the SaveInfoVar variable.


Performs the reverse process of the SaveTransforms Macro, copying the values of Transformations from the SaveInfoVar object to the Player and the Statues.

Next: Drawing a Title Screen with UMG
Prev: Input Mappings in Blueprints
Table of Contents